I am a scientist and engineer in computer vision and robotics at Atlas5D. Previously I was a research scientist at Philips and a PhD student in computer science at Johns Hopkins University. Mepaul is a neo-nickname given to me to balance out the rest—an experimentation mindset that drives me to learn everything from soldering to neural networks and beyond. 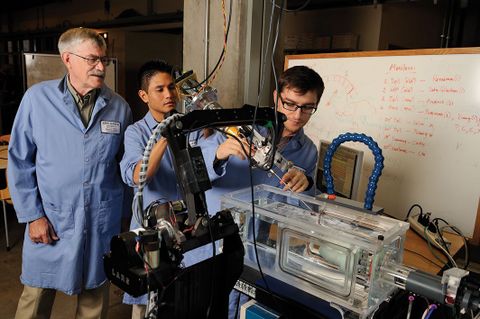 My professional interests include surgical robotics and navigation via medical images. I built a smart, dexterous robot with 3D ultrasound guidance for beating heart surgery as my PhD thesis. I am broadly interested in innovative components, systems, and techniques emerging from technical and clinical insights. The end-to-end engineering of complete, real-time systems has been a highlight of my work.

Meanwhile, these folks and communities have been the highlights of my growth:

Note: Most of the above experiences *overlap* with adjacent ones, for those keeping track.

Additional projects can be found on ResearchGate.

We develop a minimally invasive surgical robot to extract foreign objects that find their way into the heart. The system uses streaming 3D ultrasound images (known in the business as transesophageal echocardiograms or TEE) to track a foreign body as it flies around the chamber, then strategically guides a dexterous robotic end effector to capture the erratic target.

While designing robots with many degrees of freedom (such as the snake robots above and below), we ran into physical limitations in the number of joints/axes we could integrate and furthermore the cabling complexity became unwieldy. So we developed a real-time motion controller with an architecture that could scale over a high speed network—IEEE 1394.

This snake robot is a telerobotic surgical assistant designed for minimally invasive surgery of the throat and upper airways. It consists of two miniature manipulators that operate through a single entry port, a laryngoscope. The goal is to help surgeons perform tasks in confined spaces by enhancing their distal dexterity.

Robotic guidance of an uncalibrated endoscope in beating heart surgery

The rotated and small fields of view of endoscopes used in minimally invasive surgery can lead to counterintuitive images that hamper the workflow. We counter this using visual servoing, wherein the endoscope is robotically maneuvered based on features extracted from the video stream. The methods are designed to be efficient yet robust against imperfect camera calibration.

To improve sensitivity to faint signals, the James Webb Space Telescope features an extra large reflector that is collapsible in order to fit into contemporary launch vehicles. When deployed, the reflector segments must be actively and precisely controlled to act as a single mirror in a dynamic disturbance environment. We explore different parallel processor embedded computing system designs to achieve real-time, fault tolerant control of a complex structure with many degrees of freedom.